I’ve been called that a lot lately.

But they could be right.

In reality, I’m just a guy who is  interested in a lot of different ideas and areas of endeavor. And they all work together perfectly.

I finally learned to read almost at the end of 2nd grade. Once I “got” the idea, I went crazy reading everything I could get my hands on.  Just an obsessive, compulsive reader.

Even to this day if I read fiction, I CAN NOT PUT IT DOWN! It’s like a drug for me.

Then shortly after that MUSIC literally poured into my body one night…. There’s a big story about that moment that I usually  tell in my DrumSongStory “Season of Light” program so I won’t get into it here…

And from an early age I just found it natural to put words and music together. I took piano lessons but I kind of sucked at reading music (still do). It wasn’t until the guitar jumped into my hands in 8th grade that I began to obsessively compulsively teach myself guitar. And about age 16 the words and the music came together at the same time as songs.

I was a bit of a songwriting prodigy. And if I didn’t have all kinds of weird stuff in my brain and body about performing and dealing with setbacks and challenges, I wouldn’t have had to learn the other stuff that I’ve had to learn and get good at in order to keep moving forward towards my goal of getting these songs out in to the world.

Genius? If I was a genius I would have figured out a way to build a fan base (haven’t yet) or make some kind of “industry connections” (is there still an “industry”?).

At one point I quit performing altogether and out of defiant desperation I started painting.

I paint the way I painted in kindergarten.

I just mix the colors on the canvas instead of a palette because I love the way the colors blended on a pallet, and I just love that. I paint several paintings at once. Not because I’m a genius but because I often have excess paint on my brush and as I wipe it off on different canvases the colors combine and blend in entire new ways that are entirely delicious to watch.

So I keep the brush moving and the colors mixing until I like it. 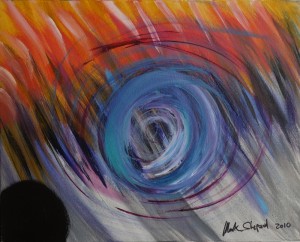 I found the painting hugely helpful because I didn’t have to perform it. I had no attachment to whether anyone like it or whether I could make a living at it. I just did it because it felt good and I did it ONLY for me. If you don’t like my painting I’m cool with that. Cause you don’t have to look at it and it doesn’t depend on my actively performing for you.

If you like it you can look at it. If you don’t like it you can focus somewhere else. With sound, if you are in the room it is going to interact with you. Your ears, your body are bathed in sound. But a visual can disappear by you closing your eyes or simply looking in a different direction.

But ultimately I learned NLP because I was so frustrated and miserable having been given this musical/linguistic gift. But not having a personality that could support it’s path out into a wider audience than my immediate family.

I learned NLP because I was desperate and miserable. It offered the fastest solutions to mastering my life. I was tired of being a victim of my own lack of confidence and power.

That ain’t “genius” that’s “invention born of necessity”. Or, as we would say it in NLP, “Resourcefulness applied to external and internal challeges breaks through the old boundaries and self limiting notions of who you are.”

Jsut like when I learned to read and when miusic swooped into my awareness, I totally and completely went crazy for NLP, Went all obsessive and compulsive on it. got home study tapes and listened to them all the time in my car.STarted teeaching NLP so that I coul learn it better. (This is without any formal certification that came later).

So if learning how my mind works and then applying that knowledge to my self makes me a genius, than maybe I am one.

I just think NLP enables me to hang in with all of you. Cuz sometimes I’m socially clueless. Sometimes I don’t get jokes. I forget faces and names (but not voices).

NLP is essentially a PROCESS modal of being a human being….

And if you haven’t noticed we humans are different from all the other animals out there because of our minds, because we are all geniuses!

Whatever the external form, it is all about transformation.

I just love all of it. Do you ever feel like  a kid in a candy store?  There is not enough time in the day to do everything I want to do.

So I’ve decided I am a genius(and you are one too!) and that genius stands for”

Do you think it’s all those years of not watching TV?  Maybe I’m j just the way everybody would be if they didn’t watch TV?

Am I a genius or just odd?

Let me know what you think! Leave a comment below.